He enjoys making presentation pieces and welcomes corporate commissions.....please contact him by email or phone for more details.

Dublin native and pioneer of the Renaissance of Celtic jewelry,Aidan was trained in his craft by a traditional seven year apprenticeship as a “chaser” beginning at age 14 at M.H.Gill and Son,Church Furnishers in Dublin.

A chaser works artistic designs into the surface of metal with a hammer and punches or chisels.

Working in a large workshop with many other craftsmen as a young man he was able to develop his talent and skill working side-by-side with the most experienced and knowledgeable artisans in the field.

Aidan learned his craft working on chalices, monstrances and tabernacles, while attending the National College of Art at night. After working for several other silver manufacturers as a chaser Aidan went into business on his own in 1978, specializing in the distinctly Celtic design tradition that had nearly died out in metal arts.

Many people are surprised to learn that there were practically no jewelers in Ireland working in Celtic design in the middle of the 20th century.

When Aidan introduced his range of designs at a decorative arts tradeshow in 1979, his jewelry was snapped up by many of the most posh and fashionable people in Ireland.

Aidan’s example in the renaissance of Celtic design and popularity of his work led many other Irish craftsmen to look to their heritage for inspiration.

“As a young lad, I was always fascinated with the ancient and medieval treasures on display at the National Museum in Kildare Street.

This was a place I frequently visited on weekends and still often go for inspiration.”

Aidan is an avid researcher and collector of books on the earlier Celtic Revival, a movement which began in the 1840s and continued into the first several decades of the 20th century.

As the Celtic Revival faded in other decorative arts in Ireland it remained strong in church furnishings and sports trophies.

Since Aidan was immersed in this area as a young man, he had no idea at the time how out of fashion this style was.

But as luck would have it, when the Celtic Revival got its second wind in the 1970s, Aidan was in a unique position to lead a new generation of artists and craftsmen as the acknowledged master of this style.

He has made silver bowls chased with biographical themes for Mr. Gay Byrne, ex-host of Ireland’s most popular TV program, The Late Show, and a 12" dish for the late Taoiseach (Prime Minister) Charles J. Haughey. Embossed on the plate was Mr. Haughey’s sailing boat, “Celtic Mist”.

He has also made the Irish Times Literature Awards since their inception.

More recently Aidan was given one of the highest honors available to an Irish goldsmith, being commissioned by the Dublin Assay Office to make a piece for the permanent collection.

This masterpiece, which took over four years to complete, is a silver sculpture in the form of a Moorish tower, chased with scenes from James Joyce’s novel, Ulysses.

He has also completed another prestigious project a chased and repoussed 16” Dish a commission for the National Museum of Ireland’s permanent collection. 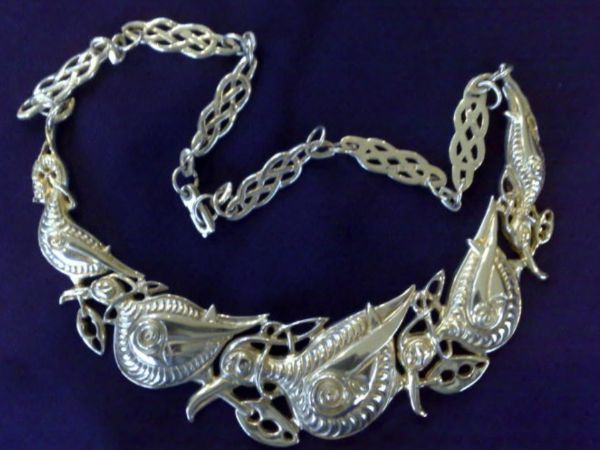